Posted at 16:47h in Press Releases by OIM International 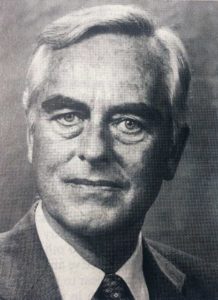 OIM founder Prof Robert René Tusenius passed away on 21 December 2018 at the age of 95. He was a former director of Stellenbosch University’ Graduate School of Business and Emeritus Professor of Business Management and Administration.

Here we pay tribute to this prominent academic and pioneer, and the underlying philosophy behind the establishment of OIM and other organisations.

The determining influence of war

Exposure to war was deeply searing for the Dutch-born Tusenius, with two childhood experiences that were particularly profound. The first was a visit to Yperen, the site in Belgium of the famous World War I battle where troops on both sides cautiously but spontaneously came out of the trenches on Christmas Eve 1914 to sing carols together and share rations and photos of loved ones. Angered by this breach, leaders of these troops then ordered them back into the trenches where they had to resume firing on each other. The absurdity of people having to return to killing each other after having just celebrated Christmas together was striking for the young Tusenius.

Crossing the Alsace border between France and Germany on this same trip led to another instance of childhood incredulity. The border went straight through a village and, he imagined, through a house. Six-year-old Tusenius wondered if war broke out before breakfast, would the father fight for the French? But if it started after breakfast, would he have to fight for the Germans? The side you fought on depended only on when you happened to eat breakfast—or where you happened to be born?

These two impressions, and his own experiences later in World War II, influenced Tusenius for the rest of his life. In war, since both sides believe they are fighting a just war, the perception of justice is very dependent on circumstances and the “accident of birth”. Also, in war, the enemy shoots at you and kills your friends, leading understandably to hatred. If hatred seems unavoidable in war, is it otherwise unavoidable? Because, come Christmas, both sides are able to come together to celebrate jointly?

The birth of understanding-based leadership

Tusenius was preoccupied with why tolerance and cooperation cannot be achieved without violent conflict. He wondered why violence was often necessary to make people see and be willing to travel peaceful avenues that existed all along. He pondered too why some countries or regions are prosperous while others, with similar problems and opportunities, are poor? Likewise, why are some organisations successful while others, again with equivalent problems and opportunities, fail?

Over the years, it became clear to him that the answer to each of these questions was the same. Namely, a disastrous lack of understanding among leaders and their followers, firstly of some of the basic aspects of human nature and, secondly, of basic economic, political or cultural realities of the world in which we live.

Another contributing factor, he felt, was the lethargy of the public at large, the “silent majority”. Many members of the public who have the knowledge, wisdom and experience to see through the objectives, motives and strategies of “false prophets” don’t want to get involved, they don’t want to “rock the boat”, they don’t want to be “bothered” and/or they don’t have the courage to be counted—until, of course, it is too late! Unfortunately, the world abounds with otherwise intelligent people who live in a shortsighted, superficial “peace in our time” dream world.

The result, Tusenius noted, is that history is often determined by a small group of activists. They often may have a very limited or superficial understanding of the issues involved and of the consequences of their actions. Meanwhile, many of those who know better, for some reason, stand back and allow things to develop into disasters.

This awareness gradually led to the development of a unique, all-embracing leadership and action philosophy called Understanding-based Leadership® for maximum success in all circumstances. This philosophy formed the core of the OIM International’s original programmes and processes.

OIM’s mission was to help individuals in their personal lives, as well as in private and public organisations and communities, to acquire skills that will enable them to practice understanding-based leadership for maximum success in all circumstances, for the benefit of themselves, their families, and for society in general.

In the 1970s and 1980s, Tusenius formed the nonprofit organisations Action South Africa, Prosperity through Private Enterprise, Youth Leadership Forum, and the Foundation for Peace and Prosperity in Africa. Through these organisations, he conducted scores of mediation and conflict resolution workshops between political, community and youth leaders representing nearly all political persuasions. He also led dozens of programmes and public seminars on diverse politico-economic, economic development and conflict resolution subjects. He was also actively involved in entrepreneurial and small business development, particularly in townships in Cape Town, Johannesburg and Pretoria.

Early life and other professional associations

Born in The Hague in the Netherlands in 1923, Tusenius joined the Dutch Resistance in World War II. He helped organise a spy ring and an escape route through the Netherlands, Belgium and France to Spain for shot-down Allied flying personnel, escaped POWs, Resistance fighters and Jews. He escaped to Britain in 1943 and was recognized as an Engelandvaarder – the approximately 2,000 Dutch nationals who escaped from the German-occupied Netherlands to England to join the allied forces. He was awarded the Dutch Cross of Merit for his work in the Resistance and setting up the escape route. After jungle warfare training in Australia, he was in commissioned active service in the East, particularly helping to liberate parts of Indonesia and Malaysia from Japanese occupation.

After demobilisation, he was a management trainee with Royal Dutch Shell in the Netherlands. He applied for a position with Nedbank (then called Nederlandse Bank van Zuid Afrika) in South Africa. After two years with Nedbank, he became a management trainee at ISCOR. He founded and headed the Industrial Economics Division at the CSIR, where he was involved in business economics, industrial economics and operations research within the CSIR and on behalf of a wide variety of industries. He also studied and lectured in Europe and the United States.

From 1959-1972, he was an independent professional manager, business adviser and company director. He undertook projects for dozens of large and small industrial, commercial and financial organisations in Southern Africa and Europe. From 1972-1976, he was a Professor at the University of Stellenbosch’s Graduate School of Business and he was the Director there from 1973-76. He was also the first Director of the School’s Institute of Entrepreneurship and Management.

He is survived by two daughters, two sons-in-law and two grandchildren.